Tropical cyclone Enawo and its effect on weather in western Australia

Tropical cyclone Enawo made landfall in Madagascar on 7 March 08 UTC as a category 4 cyclone. According to Madagascar’s National Bureau of Risk and Disaster Management, 38 people have been killed countrywide by the cyclone. The north-eastern district of Antalaha was particularly badly affected. Mudslides due to heavy rain of more than 300 mm damaged roads and cut-off communication lines. Up to 150 000 people have been displaced by the cyclone which was the strongest cyclone to strike Madagascar since Gafilo in 2004. .

During the last days Enawo moved southward across Madagascar and it is now located southeast of the island (see Figures below, black contours give the mean sea level pressure). It will continue to move southward toward the midlatitudes. The cyclone is forecast to weaken due to cooler sea surface temperature and it will likely merge with a midlatitude low-pressure system. This process of a tropical cyclone moving into midlatitudes is referred to as extratropical transition. Though the cyclone is not moving toward Australia, it may still have an indirect impact on the weather in western Australia as is described below. The midlatitude jet stream (This is the region of strong westerly winds at about 10 km height. Airlines prefer to fly in these jets when heading eastward to save fuel.) is currently oriented from northwest to southeast over the South Indian Ocean (see shading in Figures). Locally wind speeds reach more than 300 km/h. The region of the wind maximum is commonly referred to as jet streak. This jet streak weakens rapidly until 12 March 00 UTC.

The figures show how tropical cyclone Enawo is moving southward. Nearly simultaneously a new jet streak forms south of the cyclone on 12 March. The proximity of the cyclone to the jet suggests that the cyclone itself is contributing to an intensification of upper-level wind speeds (please contact the Weatheroo team if you are interested in the physical processes behind that jet intensification). Initially, the jet streak is oriented from west to east relatively close to Antarctica. The orientation of the jet streak changes until 13 March. The animation shows that on 13 March 12 UTC the jet streak is oriented from south to north over the South Indian Ocean. Associated with this jet stream are a strong southerly flow at 10 km height, but also close to the surface. In this southerly flow a midlatitude low-pressure system develops and propagates northward. On 14 March, 12 UTC the low will be located south of western Australia. It is forecast to bring strong winds to the most southwestern tip of Australia. More importantly, however, the strong northerly flow to the west of the low-pressure system is bringing relatively cold air masses from high latitudes toward western Australia leading to a cool-change in Perth. This is shown by the forecast of the temperature at 850 hPa (~1.5 km height). After reaching about 20 degree Celsius on Sunday 12 March, the 850 hPa temperature drops rapidly and reaches only 5 degree Celsius on Wednesday. This cool-change at 850 hPa can also be felt at the surface: while the temperature in Perth is expected to reach 30 degree Celsius on Sunday, it will hardly reach 20 degree Celsius in the following days.

Though tropical cyclone Enawo was several thousand kilometers away from Australia, there are strong indications that it is effecting the weather in Western Australia in the beginning of next week. The impact of a tropical cyclones on regions far away from the cyclone itself is referred to as downstream impact. 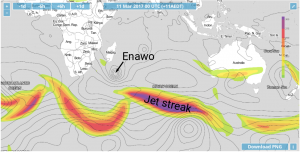 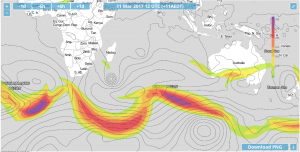 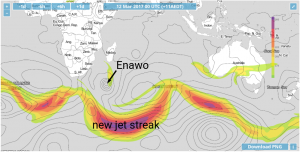 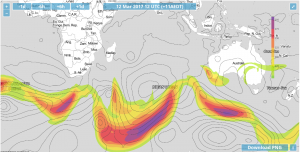 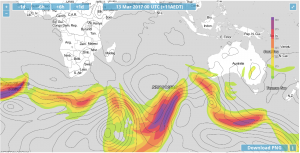 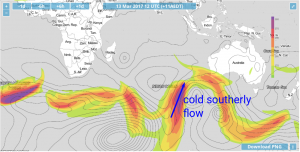 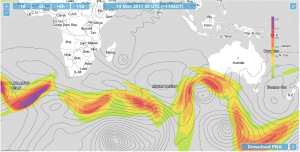 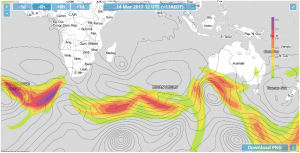 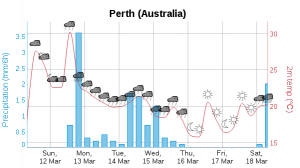 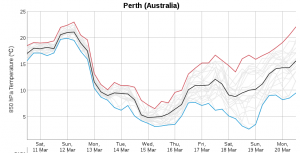